← Get in the car, Alice
Grinning like the Cheshire Cat →

After four years of playing, I finally won a medal in disc golf!

In Kansas City we have a great summer-long event called “Corporate Challenge“. In their own words, KCCC is “an Olympic-type event that allows Kansas City area corporations to interact with each other through a variety of sporting events.” These events include flag football, soccer, softball, dodge ball, volleyball, tennis, table tennis, pool, darts and my personal favorite:

I picked up disc golf four years ago specifically so we’d have more events for our company team. I’d played some in college but never very seriously. My partner that year had played Ultimate Frisbee but not Disc Golf. It was an interesting pairing, to say the least. But, we ended up in 4th that year, which was pretty good! The past two years, I’ve introduced another two partners to the sport and while we’ve done well, that medal award has always been just outside our grasp.

This year, I had yet another partner and she’s never played either (sigh). But, she’s athletic, a black belt in Tae Kwon Do, has a strong arm from bowling and a willingness to try. We did one practice night earlier this week and I found she was a quick learner and could put her past athletic knowledge to use for this event (did you know that a martial arts yell DOES help your throw?!). Maybe…just maybe…we could pull this off…

This morning, we got a little lost trying to find the course (this was not new to me…I get lost every year) and then we had about an hour rain delay. We went up and found a CVS to purchase some snacks and got back just as they told us to come play. We paired up with another two-woman team and ’round the course we went.

For reference, Disc Golf is scored a lot like (Ball) Golf and some of the references are the same as well, like birdie, drive, putt, and par. Essentially, both games are beautiful long walks spoiled by flying objects…

Our team had several pars in the front 9 then a lousy max-6 (ouch). We ended that side one shot ahead of the other team. We passed the baton back and forth on the second half – they’d get a par then we’d get a par. We ended one shot behind our teammates on the back half, both teams ending with a 69-shot total.

I have to say, it was great to be paired with another team so equal to us. It both relaxes you that you’re not doing “so bad” and yet also pushes you to keep it up – it’s easier to lag/drop your game if the other team isn’t doing as well. This was quite easily the best game I’d personally ever played!

We delivered our cards and saw that we were in second place with that score. We sat and waited for the rest of the division to show up – that seemed to take forever (or maybe it was just because we were hungry…) Another team finished right behind us and tied for first with a 67. When we asked, we found that their first place tie pushed both our teams down to third place. One of the last teams in our division ended with a 69 as well, creating a 3-way tie for the bronze. We’ll take it! 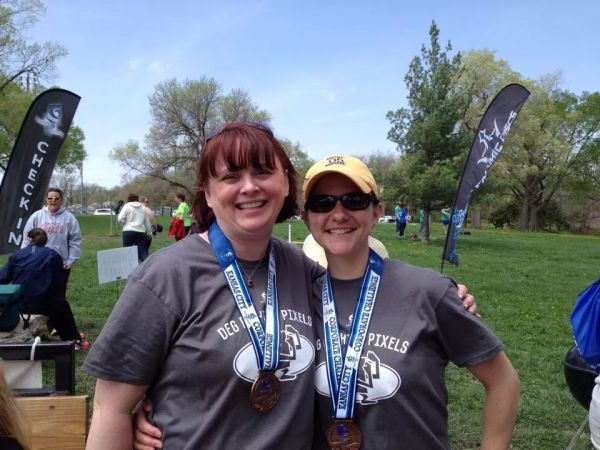 Bronze looks good on us, don’t ya think? Yeah, that big grin on my face is pure happiness. It took me four years to get this medal and I’m pretty proud of it. It might seem silly to be proud of a disc golf medal, but I’m still wearing it and still smiling. 🙂 My kids are laughing at me a little but I told them they didn’t hand out medals and trophies like candy when I was a kid – you had to be in the top three to get something, anything; you didn’t get a medal put on you just for showing up! For me, this is a great example of what you can earn when you work for it and believe you can do it. Next year…we reach for a GOLD medal!

I was curious how we would have done if we’d been in another division. The prevailing theory is that the larger divisions do better overall because they have a bigger pool to pull from. We’re in the second smallest division, so we kind of have to coerce people to play sometimes. Overall, this is how we stacked up across the 8 divisions:

← Get in the car, Alice
Grinning like the Cheshire Cat →