What gives words their power in our lives? Is it the context in which they’re used? Is it the speaker or the writer of them? Or is it the words themselves, the combination of them, that gives them power?

I’m sure many of you have heard this quote, or read it, or seen it used in other inspirational posts. But, I’m going to share it here anyway because it helps me illustrate my point. And…because I can. 🙂

“Our deepest fear is not that we are inadequate. Our deepest fear is that we are powerful beyond measure. It is our light, not our darkness that most frightens us. We ask ourselves, Who am I to be brilliant, gorgeous, talented, and fabulous? Actually, who are you not to be? You are a child of God. Your playing small does not serve the world. There is nothing enlightened about shrinking so that other people will not feel insecure around you. We are all meant to shine, as children do. We were born to make manifest the glory of God that is within us. It is not just in some of us; it is in everyone and as we let our own light shine, we unconsciously give others permission to do the same. As we are liberated from our own fear, our presence automatically liberates others. “

And I bet if I asked you who said it you’d probably say “Nelson Mandela!” (if you’re good with trivia anyway…). And you, my friend, would be wrong. It was not Nelson Mandela who said this. This quote was found in a book by Marianne Williamson entitled, “Return to Love: Reflections on the Principles of a Course in Miracles“.  (Proof of that can be found here, and here, and in the actual work in which it was published.)

Now, here’s the question of the day: does it really matter who said it?!

Too often we read a meme or an inspirational post and we assume because it has a famous person’s name or photo on it they must have said it and that makes it good…makes it powerful. But, many times, that’s a fallacy that’s easy to believe instead of making sure it was really said by them. There’s actually an entire Pinterest board of quote memes attributed to Taylor Swift…that were actually said by Hitler, Bin Laden & Stalin. These images were spreading like wildfire until it was revealed they weren’t, in fact, said by Ms. Swift.

There are also a slew of quotes that are attributed to Morgan Freeman, Will Smith, the POTUS, other presidents, Sarah Palin, Stephen King, and other celebrities that they never said…never thought of saying.

Of course, there are celebrity quotes that were in fact said by the celebrity in question. Some good, some not so good. But because the person said it, it’s celebrated and shared…and maybe not read too closely. Like this one: 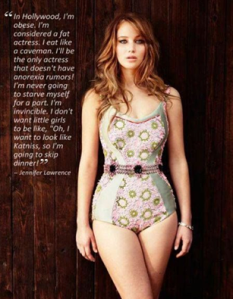 So – has anyone ever actually heard someone else call Jennifer Lawrence (JLaw) “fat” or “obese” outside of a Hollywood casting room? I would certainly hope not! She has a perfect hour-glass pin-up figure – a modern Marilyn figure, if you will. She sounds legit and positive, especially to girls & some women larger than a size 4, but she’s actually shaming thin actresses, thin WOMEN, in general. That they can only be that thin if they diet, starve themselves or have an eating disorder. Those are powerful – and negative – words.

Does it matter who says these things? As an online article read, if the same statements that JLaw makes were attributed to, say Melissa McCarthy (or Rosie O’Donnell or Kirstie Alley) would they have the same impact? Would they encourage young women to accept their body types? Or would the Internet scoff that those women really ARE fat and maybe they should diet?

I don’t want this to get into a discussion on body image, body shaming, or anything along those lines. This is about the words themselves. So…move along Internet trolls. You have no place on this page.

Some of the things JLaw says are strong…and some are shaming. Let’s look at one of the strong statements as a standalone:

“I’m never going to starve myself for a part.”

To me, that is POWERFUL for an actress to say/think/feel! And I don’t care if it’s Heidi Klum, JLaw or Ms. McCarthy that said it. Or what they said before or after it. That single sentence has strength in it – it says, “Accept me for who I am.” and “I know my worth.”

I look at the Taylor Swift memes and I realize I don’t care who really said it (and for me personally, attaching Taylor to it does it more harm than help, but whatever). The words themselves are powerful to me, the reader:

The writer is the engineer of the human soul.

The only preventative measure one can take is to live irregularly.

Does your reaction change if you know how or where the statement was used? Does it really affect your feelings to know who said it? It’s good to give correct attribution if you can, but does it MATTER? Does it change how it makes you feel to know these things? Or do the words themselves affect you simply because you’re reading it at the right time in your life?

So…why am I sharing these thoughts with you today? Because I want you to feel. I want you to be inspired. I want you to allow words to move you to tears, to dancing and to love. Be brave and let the words of others move you as deeply as possible. Then, take the next step…let your words move others. 😉