He will risk everything to protect her… 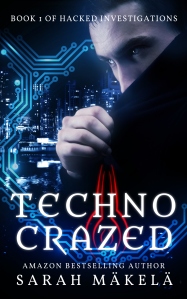 Private Investigator Hannah Franklin’s life is turned upside down after being contacted by a former employee of MAX Home Security, the leader in security services. But they’re not just protecting people anymore. Hannah’s informant claims to have proof that MAX has ordered the assassination of politicians who stood against the corporation.

When her informant is killed and an attempt is made on her life, Hannah has no choice but to con-tact a freelance hacker. Her only hope now lies in the hands of a man she never expected to welcome back into her life.

Ian Bradley has lost his girlfriend and his job, as well as having acquired a very annoying gnome. Now his ex, Hannah, is in danger, and she needs his help. Ian vows to protect Hannah with every resource available to him—and as a technomage in a high-tech world, his resources are endless…

Sarah Mäkelä loves her fiction dark, magical, and passionate. She is a paranormal romance author, but she’s written all over the romance spectrum with cyberpunk, sci-fi, fantasy, urban fantasy… even a sweet contemporary romance!

A life-long paranormal fan, she still sleeps with a night light. In her spare time, she reads sexy books, watches scary movies and Ghost Adventures, and plays computer games with her husband. When she gets the chance, she loves traveling the world too.

A loud, metallic click sounded from the other side of the room. Then footsteps raced around the couch.

“Hannah? Are you okay?” Ian’s voice drew her gaze to his concerned face.

“What did you do? What are you?” She gulped, unsure if she wanted an answer to that.

He frowned, and a muscle clenched in his jaw. “I’m a technomage. I use and simulate magic through technology.”

“What?” She pressed the back of her hand to her forehead. Pain formed at her temples. “Whoa. How long have you…?”

“Since puberty. My mother was also a technomage.” He shrugged a shoulder. “It’s always been part of who I am. I’m just pretty good at hiding it.”

She blinked. Wow, his mother had seemed so normal when she’d met his parents. Had she really known him? He seemed like a stranger. No, she wouldn’t throw away their memories together because he’d hidden part of himself. She wouldn’t do that to him. Or she’d try not to, at least. “Were you ever going to tell me? Like if things had progressed between us?”

He helped her up and grabbed the blanket, keeping her covered. “I would have, eventually. Wouldn’t be nice of me to do otherwise, you know?”

She nodded and stared into his brown eyes. “I’ve missed you.”

He released a breath and rested his forehead against hers. “I’ve missed you too. God, I really screwed things up, didn’t I?”

Placing her hand against his chest, she angled her face to brush her lips against his. “We both did.”

Ian ran his hand through her hair, cupping the back of her head before deepening the kiss. His mouth possessed hers like a thirsty man at a well. He always kissed hard and desperately, and she loved it.

Ian scooped her into his arms, making her feel desirable. He carried her into the bedroom and kicked the door shut. Crossing the room, he set her down and ran his hands over her neck, shoulders, and down to her hips.

“You’re so beautiful, Hannah. I missed out on a lot when –“

“Hush. Don’t think about that. We’re together now.” She drew his face down to hers, kissing him.

He held himself over her, obviously being careful of her wounded state. She appreciated that, but part of her didn’t care about the injury, she just needed him.

He stiffened and glanced over his shoulder, looking at the door. She followed his gaze to see the gnome peeking inside.

“Sorry to disturb the party. As much as I’d like to listen to you two HAVE SEX, there’s stuff to be done!” Bernard looked as happy as ever, and she so wanted to wipe that cheerfulness off his face.

Yet he was right. Damn it. She still needed to check out the donut shop. There was a possibility they might find evidence of a struggle that they could bring to the police. But hadn’t she heard a couple weeks back about someone spreading rumors of police involvement with MAX Home Security? Ian rolled next to her and placed his hands over his face. He let out a ragged sigh. “Fine. We’ll be out in a moment.”

“No more SEX!” The gnome slammed the door behind him.

“Why do you put up with him?” she asked.

“I don’t know. He tends to be okay. Most of the time, that is.” He propped up on his elbow and ran a fingertip along her arm. “He’s dangerous, though. Don’t antagonize him. He causes suicide. That’s what happened to his previous owner. I happened to be nearby, and Bernard started following me no matter what I did.”

“How do you keep him from killing you?” Hannah frowned.

“I keep him happy enough. Besides, my power doesn’t let him impact me much.” He glanced back at the door. “Unfortunately, we need to get going before he bursts in here again.”

She nodded and stared down at the quilt. “Would be easier if I had something to wear. I saw your living room floor; you cut my blouse off.”

He sighed. “Right. Well, I can give you some sweatpants and a T-shirt. Guess we’ll need to do some clothes shopping.” Cocking an eyebrow at her, he smiled. “Not that I mind.”

“Okay, what did you do to the Ian I know? You used to hate when I took you shopping.” She grinned.

Ian shrugged. “I’m just glad to do stuff with you now. I’m not like I used to be.” He glared at the door before glancing back at her. “Trust me.”

His lips thinned into a pink line. “I’m going to do everything I can to make you safe again. I swear.” He caressed his thumb along her jaw line and brushed his lips against hers once more before getting out of bed.