Confessions from a bandwagon fan

I confess…I’ve jumped on the bandwagon more than once. And none feels better than currently being in the Royals corner right now!

Yes, I confess. I’m a sports bandwagoner. I love almost every traditional sport – football, basketball, hockey, the Olympics, and sometimes even soccer and baseball. I’ll even watch boxing, racing, bowling, tennis, golf and ping-pong if the game/match is intense enough.

Of course, I do claim a few specific teams, sometimes to upset the status quo (try being a Michigan fan growing up in Buckeyes country) and sometimes because it really makes sense for me to like the team (Miami University of Ohio, PLEASE get your act together in all sports, kthnxbye).

Honestly, I really care more about a good game than about who is playing. Call me weird, but even when one of “my teams” loses, I appreciate the game play more than the W/L column. Once in a while though, just occasionally, I find myself cheering and cheering HARD for a specific team. In every game. 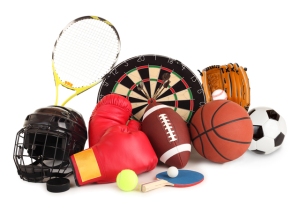 Because they were the underdog and then they’re on top.

Because they shouldn’t have been a horse in the race and they’re leaving the other teams in their dust.

Because I want to be part of that winning crowd. 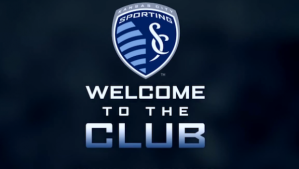 With the World Cup last year and all the soccer talk around me, it was hard to ignore the local team. And last year, the team to bandwagon for was definitely Sporting KC. My boys and I rallied around the TV, yelling for that final shootout in the MLS cup game. I jumped up and down, yelled in celebration and in frustration and when that final ball hit the net we went crazy. And it was amazing to be part of that winning feeling! And afterward, to say “Of course I watched the game! I love Sporting!!” just kept those wonderful feelings going. This year, someone said, “Sporting just made the playoffs” and I thought, ‘Huh. Maybe I should pay attention to them again.’ But…not yet. Because the Royals have my full attention.

This year, another Kansas City team is capturing my love and cheers. I have jumped up high in the middle of the bandwagon, overjoyed at the success of the Kansas City Royals. Their season was up and down but the real rally came at the end of the season – and the wild card game. And that’s the night I found the bandwagon.

I had been at chorus that night and we did our weekly routine of going to a local bar after singing to soothe our vocal chords with a drink or two and some camaraderie. Our normal bar was overcapacity so we took up spots outside and tried to watch the game through the windows and on our phones. When the A’s went from 1 down (2-3) to four up with five runs (suddenly 3-7) we all called it a night, said it had been a good season and headed to our homes. I got home and checked the score, expecting at minimum to have lost 3-7 and at worse, to have lost by even more.  But low and beyond, the boys in blue had rallied and were only down by ONE in the 8th. Holy crap! I found the game and my eyes were glued to the screen and when they tied it up in the bottom of the 9th I couldn’t watch anymore alone. My poor husband was forced to wake up…and he barely restrained me from waking the kids. We watched not one, not two, but THREE more innings. When the A’s scored in the top of the 12th, I was ready to cry. When the Royals tied it back up, I was bouncing up and down. When they got that final, game-winning run, I was exhausted and oh so excited!

And, officially, I had jumped on the Royals bandwagon. I felt like I was part of something special. And this quote from Eric Hosmer, summed it up nicely for me: 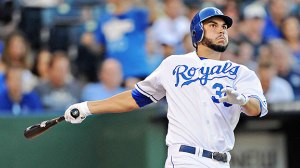 That statement made it feel like everyone there and everyone watching made an impact. That WE helped push them to victory. And with that, I was hooked again and on the bandwagon. And I was not letting go until we saw this through, whatever the outcome.

I watched in happy amazement as we swept the Angels in the American League Division Series. Twice with extra innings. And it was beautiful to behold as they took down “the best team in baseball.” 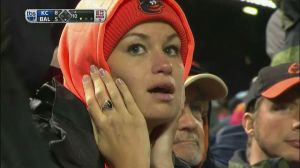 And now. Now we sit, ready to cheer them on in Game 3 of the American League Championship Series. Already up two games in the 7-game series. And they won those two games on enemy territory, astonishing Orioles fans everywhere. But not a single Royals fan is really surprised anymore. Happy. Excited. Elated. But not really surprised. This is OUR year. And as our boys come home to KC, ready to take on the Orioles on our turf, in our stands, with our fans, I am firmly seated on the bandwagon. I will proudly wear my royal blue. And I will proudly say that I’m from Kansas City…and I will loudly proclaim that…

UPDATE: As we slide into GAME 7 of the freaking WORLD SERIES I am more pumped than ever to be on this bandwagon! Inning 2 of Game 6 was truly spectacular and I can’t wait to see watch the boys bring it home tonight. Take the Crown, Royals, you’ve definitely earned it!

PS – For the record, I’m not sure I’ll ever jump on a Chiefs bandwagon, I’m a pretty diehard Cowboys fan. But, check back with me when they start having a great season…stranger things have happened in this world. 🙂