← The 50 First Dates Challenge
Finding Strength from Within →

A Note to Elf on the Shelf Parents

Dear Elf on the Shelf Parents, 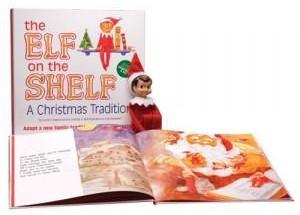 First and foremost, congrats on setting yourself up for a month of craziness. I appreciate that you love your child(ren) so much that you’ve given them a crazy-looking elvish creature to look for every morning in the hopes of keeping them well-behaved before Christmas. Whatever works, right?

I mean, I personally find the critters disturbing and the entire concept odd. I think it would freak my kids out to think they’re being watched and reported on by the little dude (dudette) to the big guy but to each their own, right? It’s become a holiday tradition almost as big as Santa himself and I’m glad you’ve jumped on the bandwagon.

Second, if you’re part of the Elf on the Shelf …er…I mean, the movement, please get creative with your Elf’s actions…or don’t talk about them. Unless you’ve thought of something different from the 2 billion Pinterest ideas, we don’t need to see it.

What I and others WOULD love to see is your child(ren) reacting to what you set up. Even if the setup is the same as every other Elf parent, YOUR children’s reactions are different. Each day, are they looking for the elf? Are they loving the elaborate steps you’ve taken to impress them? Do they clap their hands in glee? Do they giggle and point and jump for joy? Do they give the Elf love? Are they being helpful and obedient and good kids with the help of the Elf? PLEASE SHOW THAT!!

Honestly, I will take one photo of a child’s true reaction over 100 photos of Elves pooping mints into the toilet (Seriously? That’s a thing?). Show me the joy on their faces – their looks of love and happiness that you helped create with a creepy little Elf doll (and a couple of white lies). 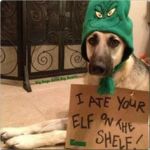 Or…are your children giving you knowing looks of disappointment when they see their Elf hasn’t moved…for three days? Did they notice the Elf went from the shelf…to the counter…to the TV…back to the shelf…but isn’t really doing anything other than moving. Kids notice…and they can’t shame you as we have chosen to shame them or our dogs.

And that, friends, brings me to the real point of this message…

Whether it’s on your phone, watch, Outlook, a post-it note on the wine bottle, whatever – set a reminder to move the damn Elf! Really? Your child’s happiness is at stake here people and that’s not too hard to remember, is it?

Honestly, I’ve read more about how you’ve forgotten to move the silly thing this year than the fun things you’ve done with him/her. And while the Elf posts are annoying anyway, all the “I forgot” messages are more so.

Plan the Elf and Elf the Plan!

Do you forget to move it because you’re short of ideas? Grab a blank calendar NOW and plan out what the Elf is going to do for the rest of the month. You can even grab an Elf calendar from Pinterest as well – there’s almost as many calendars as there are ideas of mischief. When you have a plan it’s easier to stick to it.

And, lastly, please remember this was all said with love and affection…and just a little tongue in cheek. For the record, I’m not entirely anti-Elf…I’m just anti-Elf-in-my-house (thank goodness I have tweens & teens now). 😉

PS – Other wonderfully anti-Elf posts around the Interwebs:

Posted on December 5, 2014, in Family and tagged anti-elf, Christmas traditions, Elf moving, Elf on the Shelf, Elf Parent, Elf reminders, Say No to the Elf. Bookmark the permalink. Leave a comment.

← The 50 First Dates Challenge
Finding Strength from Within →